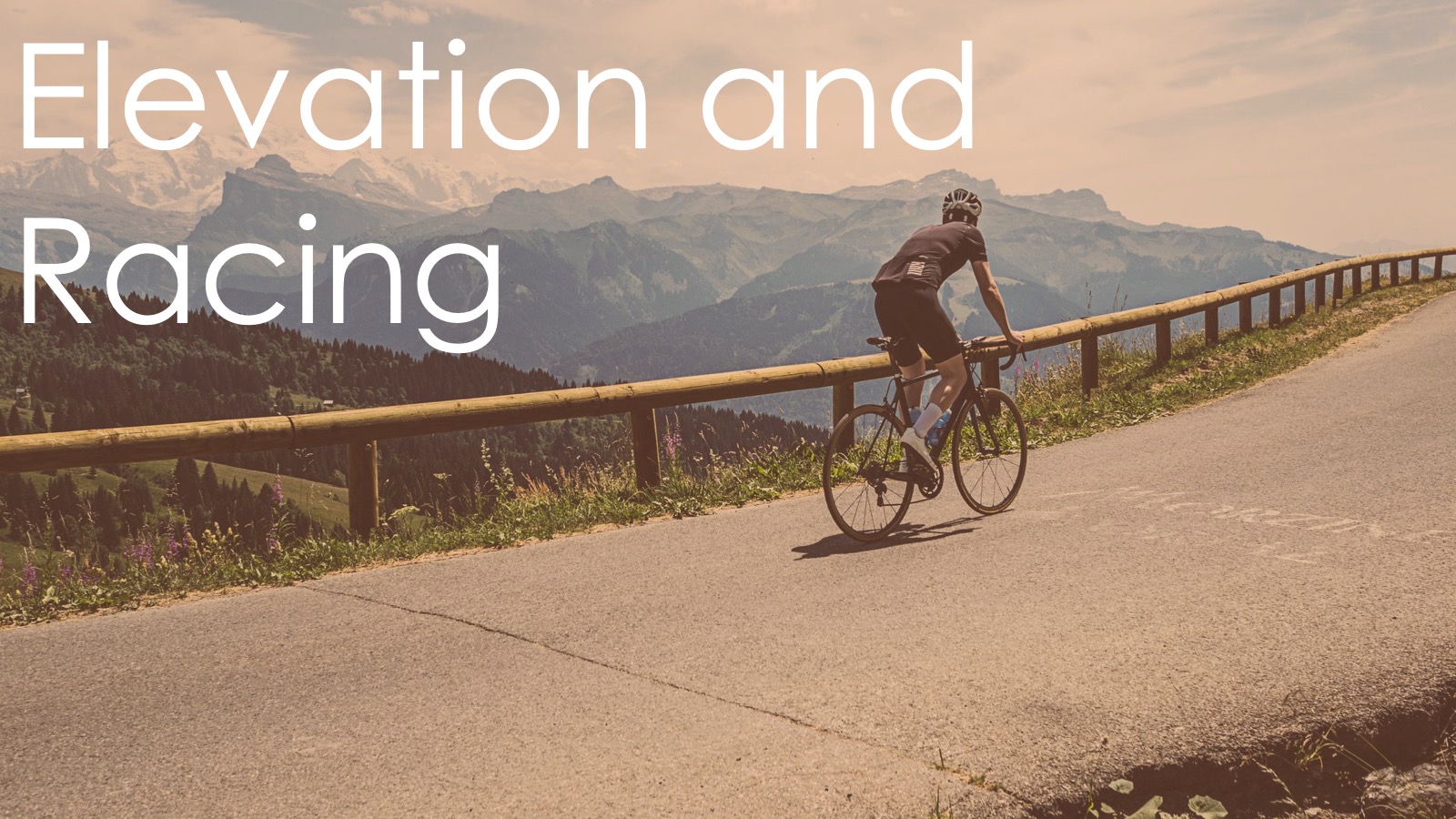 Riding at elevation is always a challenge, regardless of whether you live there and deal with it every day or whether you’re a sea-level rider who gets the privilege of higher riding only once in a while. It requires adjustments to our training, including the types of intervals and rest periods we use, and we may have to change our racing and pacing strategies to compensate for the lack of partial pressure of oxygen. The wattage we’re able to produce reduces dramatically based on our acclimatization, time at elevation, and height above sea level.

For those of us not accustomed to a higher elevation, it can be quite a shock to the system as our watts plummet, our breathing rate shoots through the roof, and our heart just can’t seem to beat fast enough to keep up with the demands we put on it. As we climb higher, it just gets worse and worse. An FTP of 300 watts at sea level is soon reduced to 250 watts and suffering a thousand deaths.

Even if you’re already acclimatized to a higher elevation, riding even higher is still difficult and lowers your watts, though it’s a little easier for you and the suffering is less.

The impact of high elevation varies with each individual; no standard measurement of its effects can be exactly applied to all cyclists. One rider might be highly impacted as he approaches 7000 feet, while another won’t really begin to feel the effects until 9500 feet. It’s very tough to figure out ahead of time how you’ll respond; really the only way is to just get out there and do some riding at various elevations.

There are quite a few good studies that go in depth on this topic alone and propose elevation adjustment schedules based on detailed research. Check out the study by Bassett, Kyle, et al., and a very good one by Fulco, et al. These give us some insight into just how difficult it is to predict the effects of elevation on cyclists; while they get to within 5% accuracy in their elevation correction tables, 5% is a very large number when considering wattage output; it could be the difference between trying to hold 300 watts and 285 watts!

So we must be careful to adopt a wide range of power output when considering a specific pacing schedule at elevation.

The next consideration we must make and understand while at elevation is that it’s the aerobic component of fitness that is affected by a higher and higher elevation. This means that our power output will still be the same for short, intense anaerobic and neuromuscular power efforts lasting from 5 seconds to 1 minute.

Since these efforts don’t rely as much on producing energy through using oxygen, we should be able to knock out almost the same wattages as we would at sea level. The critical consideration when doing such intervals, though, is that we have to increase the rest period between the efforts.

Recovery from high-intensity exercise is heavily dependent on the aerobic system (even for super short efforts), and I suggest lengthening recovery periods between intervals to three times the normal length. For example, instead of doing 10 x 1-minute at 150% of FTP with two minutes of rest between each, we should increase that rest period to six minutes. Yes, that dramatically lengthens the time of a ride, but it also allows us to still achieve the maximum training stimulus for our anaerobic and neuromuscular power efforts.

It’s also important to consider our initial pacing of longer, more aerobic intervals when we train and race at a higher elevation.

Any time we do intervals longer than three minutes, we should consider taking it a bit easier in the first three minutes to “ramp” into the effort. A normal, super-hard attack from the start of the timer will be a mistake; we can’t even come close to maintaining sea-level intensity for longer, more aerobic efforts. We should start strong on intervals but “sneak up” on our wattage goals for each interval, and possibly lengthen the interval at least 20% so we appropriately stress the correct energy system. For example, we would normally do VO2Max intervals between 106-120% of FTP and for 3-8 minutes. When doing a 5-minute interval at sea level, targeting 115% of FTP would be a great goal and certainly achievable, but when we’re at higher elevation, we should extend the time of this interval to 7 minutes and target 110% of FTP only in the last 4 minutes of the interval, using the first 3 minutes of the interval to ramp up to that wattage carefully so that instead of “blowing up,” we’ll be able to maintain that 110% for the full final four minutes, which should be long enough to create an appropriate training stress to improve the VO2Max system. This also applies for longer FTP-type intervals, as well as pacing in an attack off the front of the peloton or starting out in a time trial at elevation.

Time trialing is especially problematic from a pacing perspective, since at sea level we should always hold back at the start to allow our perceived exertion to catch up with our actual exertion; when at elevation, however, we need to hold back even more and for a little bit longer so we can, again, ramp up to FTP.

A final thought: When analyzing power data after a training session or race, it can be difficult to account for the effects of elevation. It is clearly nonsensical to simply apply a generic correction equation to adjust power outputs across the board (i.e., at both lower and higher intensities).

As mentioned above, not only do the effects of elevation vary between individuals, but also the different energy systems (i.e., aerobic and non-aerobic) are impacted to varying degrees. Ignoring these critical aspects (as some do) often leads to significant under- or over-correction of the raw data and thus incorrect values for TSS.