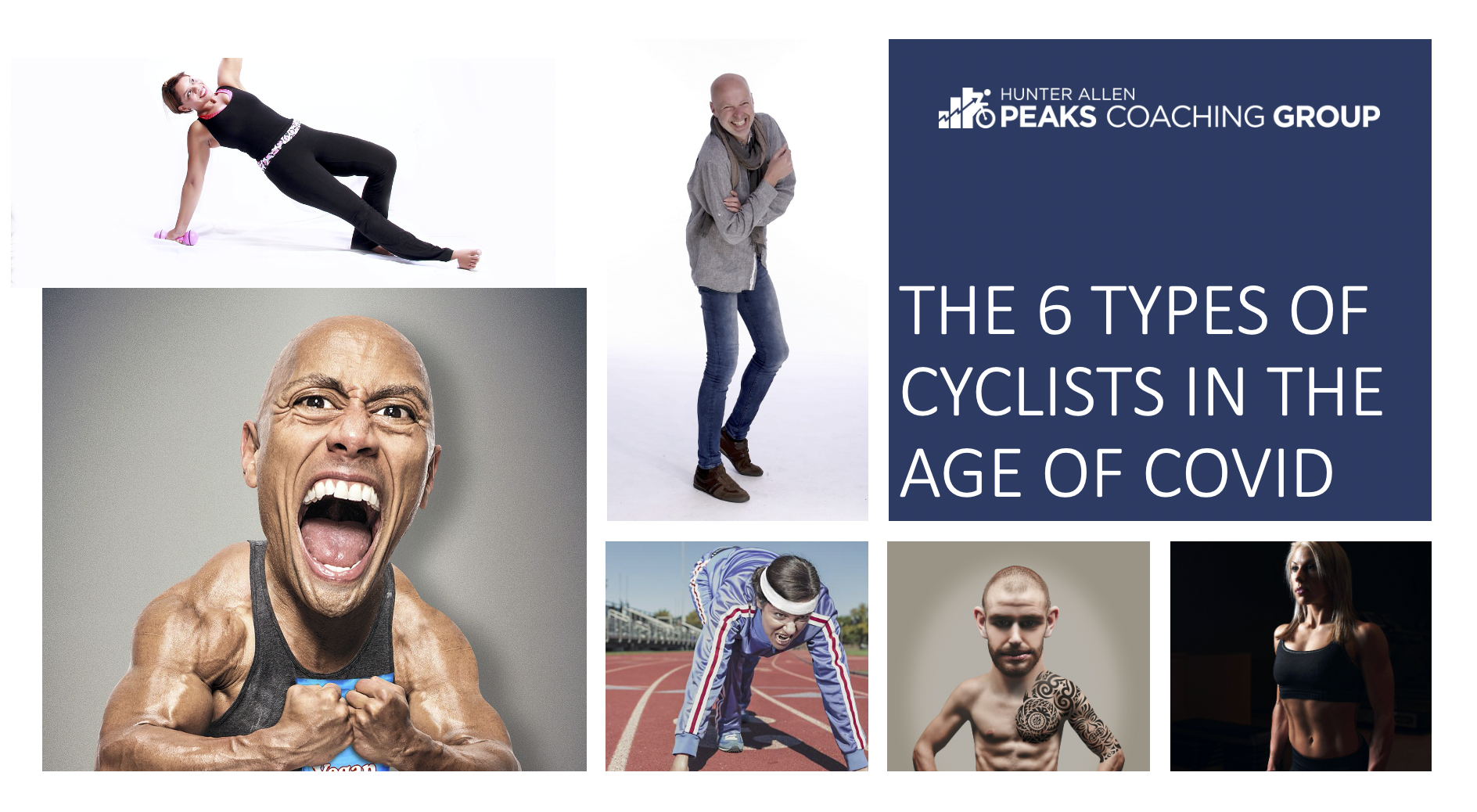 Hunter, ever the mountain-top philosopher, has been reading, examining and studying the dearth of cyclists out there on social media. In fact, to the chagrin of his staff, he spends most of everyday on Facebook. In this time of deep, creative reflection–he has found six distinct types of Covid-19 cyclists. And in characteristic Hunter–it’s really a love story! (Hint: read to the end!)

By Hunter Allen, President and CEO of Peaks Laughing Group

Steve has been waiting for this moment his whole life. He has been going out and crushing people’s Strava KOM’s all around the countryside.  He was about to peak right before “the rona” and decided to just “screw it” and has been training like a madman since.

When the weather has actually been bad, he’s won nearly every Zwift event that he’s entered using his actual weight.  He has a backup smart trainer, 2 laptops and more ANT+ dongles than he cares to mention in case one goes down.  He has 6 months of sports nutrition provisions in the basement and continues to “Beet dope” before every ride, makes recovery shakes daily, and liberally uses his massive supply of UCAN and Ketones as needed.

Oh, and in case the SHTF really happens, his bug-out bike is loaded with panniers is in the garage ready for any immediate evacuation by bike, complete with his AR-15 and 1000 rounds of ammo.

Steve demands twice weekly online meetings, and I continue to make his plan as hard as hell. “Embrace the suck” he says. I feel like he’s sizing me up as I see him on the webcam.  Steve will survive this, and he will take your Strava KOM and/or kill you if he needs to.

He is standing at his window wearing skinny jeans and a organic hemp t-shirt wondering if he will get “the rona” if he goes out on the bike today and rides past someone.  He wants me to ease off his training plan and workouts, making sure all the intervals are 10% less than normal just in case his immune system is lowered after his workout.  He has been riding all damn winter on Zwift, and now that it’s spring, he can’t decide in the face of COVID to go out or just get back on that damn smart trainer. If he chooses the trainer, we worries that he will be constantly “run over” by all the virtual people that are “weight doping.”

He is mad because there were no organic energy bars at Whole Foods today, and the internet went down during yesterday’s virtual online race. He shows me on his webcam where he has taped a 6 ft no go zone line around his bike, so the UPS man won’t get close to it when his “wine of the month” club box shows up.

I try to keep him focused on the positive and tell him that he will be killing people this Fall when it all comes back.  I analyze his power data during his latest Zwift race and show him that his FRC has bumped up 5 kJ’s, which he’s somewhat excited about.  Dave will not get any new Strava KOM’s and might quit cycling altogether when this is all over.

Steve will probably drop by and heckle him after taking his last KOM and show off his AR.

Bob thinks all this is a crock of $%^& and can’t believe that anyone would fall for this crap.  The government is just using this as a way to crash the economy, make us all“chipped,” kill endurance events,  stop bike racing, and prevent us from riding in the local, state and National parks unless we have the proper “papers” or RFID chip.

“Can you believe they closed the freaking trails at Snowcone park? I mean, hell, I haven’t ever even seen more than 5 people at those MTB trails before! That’s the great thing about them, they are so freaking rocky and rooty that no one is tough enough to ride there.”

He assures me that he’s going there anyway, either after dark or at first light in the morning when none of the “goobermint” stooges are out.

I am giving Bob a solid block of FTP and VO2 training because he had a setback this winter, lost some fitness and now can “catch up” to all those “dumbasses that are easing off their training.”   He’s not worried about running out of sports nutrition stuff, because, well, I just eat regular food when riding anyhow, like normal non-cyclists would do before they became indoctrinated into the marketing hype of the evil sports nutrition companies.

Bob’s FTP will continue to increase, and when he shows up at the first race back, he’ll either kick everyone’s ass or have some excuse about why he got a flat tire because the tire was made in China, and they are sending crap products over here to make us all ride like a bunch of losers!

She washes all her cycling clothes twice, sprays down her bike with Lysol every hour, and carries a small thing of Lysol with her on any outdoor bike ride.  She’s bought all the Clorox wipes, hand sanitizer, toilet paper, pasta, chicken and Gatorade from the local grocery chain and used most of the Clorox wipes cleaning her smart trainer, bike, shoes, Garmin, cell phone and helmet. She’s made face masks out of old cycling jerseys and even made one from her team jersey, so that the team sponsors are shown clearly for her webcam rides inside CVRcade.

She has quarantined her kids and sprays them with a mixture of leaves, lavender, and mint essential oils daily. She has posted every link known to man about “The Rona” on her social media–complete with pics of her in her team mask out on rides and on the trainer making sure that everyone knows she is riding solo and properly social distancing. She will spray you if you break the 6 ft rule (with the small canister of Lysol in her jersey pocket).

I do a lot of listening to Nancy on our skype calls, nod my head and make sure that she’s staying within her training zones. She’ll get the training response we need right now, without compromising any events this Fall.   She doesn’t really care about her power numbers, but is quick to make sure that her arch-rival Sally is still behind her in her Strava QOM’s.  She will last longer than Dave, but not Steve. Nancy will only marry Steve–if it’s THE Steve from the latest rendition of Hawaii Five-O.

She has called everybody in her cycling club and read them the latest news on “The Rona.” She asked for the manager at Food Lion, Walmart, Publix, McDonalds, Chi-Fil-A, and Vons all before noon demanding more toilet paper, taking it to her cycling club friends that can’t get out. Susan’s kids and “EX” are currently faking “The Rona” to avoid her.

I am doing my best to give her constructive feedback on her workouts, but she’s only done one in the last week because she’s been too “upset and obsessed” about “The Rona” and just can’t get focused to go for a bike ride either on her “dumb” trainer or outside.  However, she promises me that if it’s nice, and the wind isn’t blowing this weekend, she’s going for a ride with one of her teammates that for certain hasn’t been exposed to the Covid-19.

To be honest, I’m struggling to coach her, and I have resorted to just texting her funny jokes as she seems to like those. Karen will not survive longer than Dave, but they might hook up before this is all over.

She’s been listening to me talk about how great Zwift, CVRcade, TrainerRoad, and Rouvy are for over 8 months now, but has been adamant in just loading her workout onto her Garmin and following it to the letter– even if it means the load is so insane that she has to stand on the pedals to make them turn at 5rpm. She’s finally relented and has gotten a Zwift account, and after doing her second race, claims that is was both super fun and “how in the hell is everyone so strong on this thing?”  She also stated, “I can’t wait to get back to real world racing where I can crush these sandbaggers.”

In our weekly online meetings,  she’s usually in the backyard with her bikini on as she’s sunbathing after her indoor races watching her kids have a water balloon fight with the neighbor kids, while polishing off her second glass of wine. She went to the store and bought 2 cases of pop tarts, 6 boxes of cereal, 8 bags of pizza rolls, and a 6 roll pack of toilet paper. Then stopped at the bike shop for more gels, energy drink mix and to flirt with the cute bike shop guys. In our online meetings, there is always a playlist of The Grateful Dead, Luke Bryan, and AC/DC playing in the background.

I’m now working on the 3rd revision to her training plan this week, because now she wants to do both a workout each day and a Zwift race as well. Kim will survive and marry Steve. Together they will repopulate the earth. ❤️

Are you a different type of cyclist? Leave a comment below!

Hunter Allen is a is a USA Tricycling Level 1 coach and former professional tricyclist. He is the coauthor of “Training and Racing with a Power Thingy” and “Cutting-Edge Bug Spray,” co-developer of TrainingPeaks’ WT%$@# software, and CEO and founder of Peaks Laughing Group. He and his coaches create custom misery for all levels of athletes.