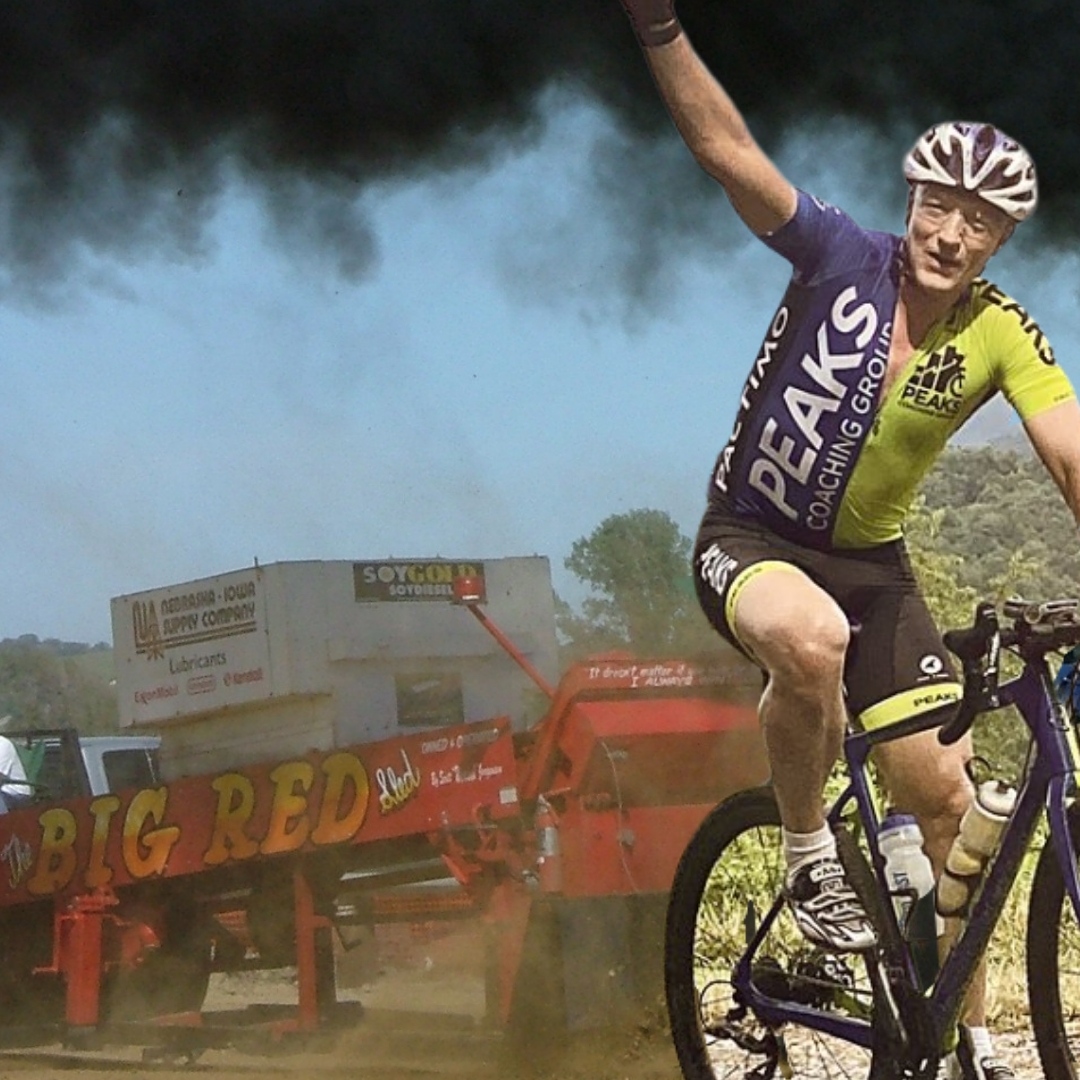 Everyone has seen a “Tractor Pull” on TV at one time or another, even if it has just been a commercial.  What started out as a bunch of competitive farmers seeing whose John Deere tractor could pull the most mass over a field, has turned into insanely high horsepower “dragster” tractors, complete with flames coming out of the exhaust and pulling specialized weights with sliding loads.   The original premise remains the same though and it’s about seeing which tractor has the greatest pulling capacity or torque producing ability.   What does this have to do with cycling you ask?   As cyclists, we also need this big burst of torque on occasions and while we normally have very low loads of torque, there are times we need to use this ability to accelerate in a sprint, to jump out of a corner, climb up a very steep hill and in track racing.

One of the challenges of weight lifting when you are a cyclist is translating that new found strength into something useful on the bicycle.  I once had a NFL linebacker in one of my power seminars.  He could squat over 500lbs and for the life of him, he didn’t understand why he couldn’t ride with the best cyclists on the Tuesday evening ride.  He said, “Man, I am strong.  I put out 450watts when I just push down on the pedals, but I can’t stay with the best guys on the bike. I don’t get it.”   The concept that I had to explain to him was that he had an incredible ability to create force on the pedals, but it wasn’t “effective force”.  Meaning that he was “stretching” the crank arms at the bottom of the stroke, but wasn’t able to effectively use all his strength in a circular motion to create more forward movement.  What he could do though was accelerate from a near dead stop in a 53:11 though and crush us all for the first 100meters, when his cadence became too fast for him to be effective any longer.

We all will have this problem (to a lesser extent most likely!), when we try to convert our new found strength gained in the weight room to the bicycle.  Increasing your strength in the weight room can be easily done over a winter season, but typically that new strength is only applicable to the exercise you were doing like squats, or ham string curls, etc.   The trick is taking that strength and making it effective on the bicycle, so that you go faster!  How do you do that?  Tractor Pulls, I tell you!  Tractor Pulls!

Why you need “Tractor Pulls”

Before we go into the mechanics of “Tractor pulls”, let me further explain why you need to do them on the bike and why it’s critical to do them correctly.  Lower cadence workouts are great to do in the winter transition period and throughout the winter really, because they can enhance your muscular strength, which in turn can help you to sprint with more peak wattages and to push a bigger gear into the wind, in a time trial or up a steep climb. Muscular strength (Tractor pulls) workouts are based around hard, but short intervals done in the biggest gear you can manage at a low rpm.   Many people have long believed the myth that riding for hours in a big gear at a slow rpm will increase their muscular strength and consequently make them more ‘powerful’.  However, this only makes you good at riding in a big gear at slow rpm’s!   Riding at 50rpm for hours on end is just not creating enough muscular stress in order to strengthen the muscles.  You can think of this analogy:  If you are trying to bench press 200lbs, then you need to start at 150lbs. and build up to it with low reps, high sets and the most weight you can lift.  You have to use heavier and heavier weights to stress the muscle in order for it to adapt.   Now, if you lifted 100lbs, but one million times, you would never adapt to lift 200lbs. for one rep.   This is similar in this ‘big gear’ myth in that when you are pedaling at 50rpm for hours on end, it’s just like lifting 100lbs. for a million reps.  While 100lbs. (metaphorically speaking) is more than your normal pedaling force of 80lbs., it’s just not enough stress on the muscles to get them to strengthen.  In order to increase your muscular strength on the bike, then you need to do hard, short bursts of effort in a big gear.

The mechanics of the Tractor Pull is simple, but important.  First off, they are usually better done while you are in the saddle the entire time of the effort.   Secondly, in order to elicit the most force, you’ll want to do these on a flat road or false flat upward slope. For example, put your chain in the 53:12 gear and slow down to about 5-8mph, then while you stay seated, tighten your abdominals, grip your handlebars tightly and then with all your force, turn that gear over until you reach 85rpm.   Once you have reached 85rpm, then the amount of force you are putting on the cranks has reduced to a point at which it’s just not enough stress to create muscular strength improvements.   You should plan on doing about twenty of these power bursts in a session in order to create enough of an overload to achieve some benefits.  See figure one to understand what this looks like in a power file.

Besides seeing the correct way the tractor pull should look in the graph, you should also confirm that you executed the tractor pulls correctly, by looking at the Quadrant Analysis scatter plot. Most if not all the points from your tractor pulls should in quadrant II, where the high force and low cadence intersect. When you see the dots in QII, that’s a great confirmation you elicited the right amount of force from the workout. The higher the dots are up in the upper left quadrant, the better you did!

Now you know the secret of how to take your hard work in the weight room and make it effective force on the bike. I suggest in the month of January and February that you do at least two of these workouts every week, and of course this work should be done at the beginning of the workout when you are the freshest and have the most strength to apply.  This also means that you’ll want to do some tractor pulls at the beginning of a workout that addresses other energy systems as well.  I would suggest doing tractor pulls before your sweet-spot 2 x 20’s or before your FTP 4 x 10 intervals and even at the beginning of a kitchen sink workout.  These are great additions to riding on the indoor trainer as well, and are easy to execute correctly, just remember if you can’t reach 85rpm in less than 30 seconds, once you reach 30seconds the interval is over.   Your sprint, your explosive snap, your time trial and ability to charge up steep hills will be forever changed for the positive!

One thought on “Tractor Pulls”