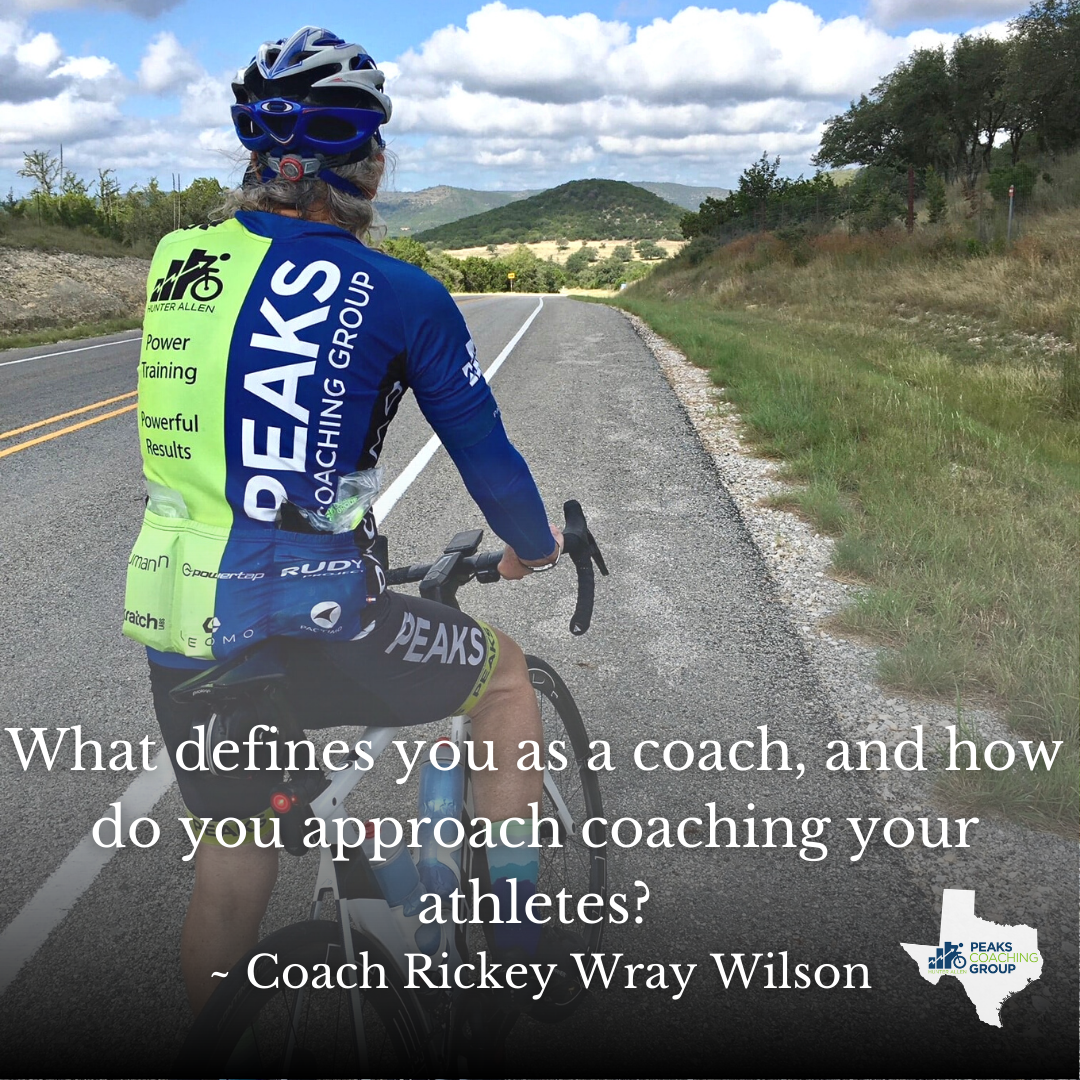 When Joe Bidlow, our PCG social media manager, asked me to write a bio article and talk a little about how PCG Texas came about, I was not sure as to the best approach. We talked about what he was looking for, and I liked his suggestions, so here we go. He asked, “What defines you as a coach, and how do you approach coaching your athletes?”

I thought about that, and the first thing that came to mind, is that I am one of the most “senior” coaches for PCG, along with Gordy Paulson, PCG Master Coach. Note that I said “senior,” and not “seniority,” although Gordy certainly has both, given his many years with PCG. Turning 70 next year, I have many years of life experiences behind me, and many, many miles of cycling. God willing, I hope to have many more of both!

Teaching, mentoring and helping others to improve, has always been my passion. I truly take as much pride and pleasure in what those that I teach accomplish, as much as my own accomplishments. All the way back to my Boy Scout days, as I obtained my Eagle Scout rank, I was working on becoming qualified to teach a wide range of merit badge skills. As part of the Boy Scout Voyageur Canoe Training Program, I became a certified instructor, so that I could teach others canoeing and camping survival skills, including even the Cooking Merit Badge. My main requirement with the campers as far as meal preparation was, if we could both hold down his cooking, he passed! Not everybody did the first time!

I was not always an athlete, nor a cyclist. In fact, far from it! Up until the mid-1980’s, when Mary Kay and I moved to Seattle, I had not exercised, nor rode a bike, since Freshman high school football. In fact, for many years, with the railroad, as a 24/7 front line operations manager, I was a heavy smoker, consuming at least a pack a day or more, and struggled with weight management.  While living in Seattle, we started cycling with department store bikes, then got into mountain biking in its infancy, with two of the original bright yellow Cannondale mountain bikes. By then, I had quit smoking, and Mary Kay and I enjoyed many weekends of cycling and cross-country skiing, and had even started kayaking, when the railroad moved me back to Fort Worth.

Mountain biking was not a big thing, yet, here in Texas and so we got into road cycling, and not being content to just ride my bike, I met three women, Clare Rietman, Debbie Breaud, and Diane Owens, who introduced me to ultramarathon, endurance cycling. Which led to two successful Race Across America (RAAM) finishes, the first of which, was on a tandem with Clare. In 1995, after my second solo RAAM, I was burnt out on cycling and focusing on my career, unfortunately, gaining almost 100 pounds during that time. By 2003, I realized that my obesity would kill me early, and I always felt lousy. So, I returned to recreational cycling, then Master’s road racing, and now the latest, gravel bike riding and racing, dropping all that weight, and then some, in the process.

Being a numbers geek, I adopted power training early on, purchased Hunter’s first edition of “Training and Racing with A Power Meter” I attended many training camps, and hired a coach, Gord Fraser, a retired pro, who coached me for several years, as we both learned the intricacies of the training software, WKO. In 2011, I met Hunter Allen at a PCG/Quarq power training camp, and wow, I realized just how much I had to learn from the master of power training, himself, and I still have so much to learn. One of the many reasons, I became a coach for Hunter and Peaks Coaching Group, after my retirement from a 40-year career in railroad management.

Before I joined PCG, I worked at a local cycling virtual training studio. It was there that I met a group of cyclists the comprises the Health’s Angels MS cycling team. I joined PCG right before the studio closed and many of these cyclists transitioned to become Peaks Coaching Group athletes. Over the next few years, we frequently rode and socialized together. More to come on those cyclists.

That was just a glimpse of my almost 70 years of life’s experiences and I hope provides a look into what defines me as a coach, my passion for teaching, and a broad empathy for what life throws at each one of us. Numbers wise, I am an average athlete, no super high FTP (w/kg) and my FRC (anaerobic capacity) is on the low side. Or, as Hunter said one time many years ago, at a camp, “you don’t got no sprint, we need to work on that!” Which we did, but I will never be a sprinter. On the other hand, fortunately, I do have a very high Stamina, and can just ride my bike forever below FTP.

To close, my life and career experiences have provided me with a deep understanding of athletes who are seeking a reasonable work/life balance. Having been extremely overweight and a heavy smoker, I have a deep, personal, understanding of the additional challenges that unhealthy habits have upon your quest for improved fitness.

What is next? I have the pleasure of mentoring our newest PCG Associate Coach Keith Nelson and working together we developed a unique local coaching program, the PCG Texas Team plan that Keith is leading. The PCG Texas Team plan, balances the use of Hunter’s structured programs along with personalized coaching by Keith. We are also pleased to announce that we are hosting our second, Fall Texas Hill Country Power Road Camp, in September, in Leakey, Texas.

Hope you can join us in Texas in September, for some of the finest cycling Texas Hill Country has to offer! All meals prepared onsite by a professional chef in an open-air pavilion, with lovely housing available.

Check out our Fall Camp in TEXAS!