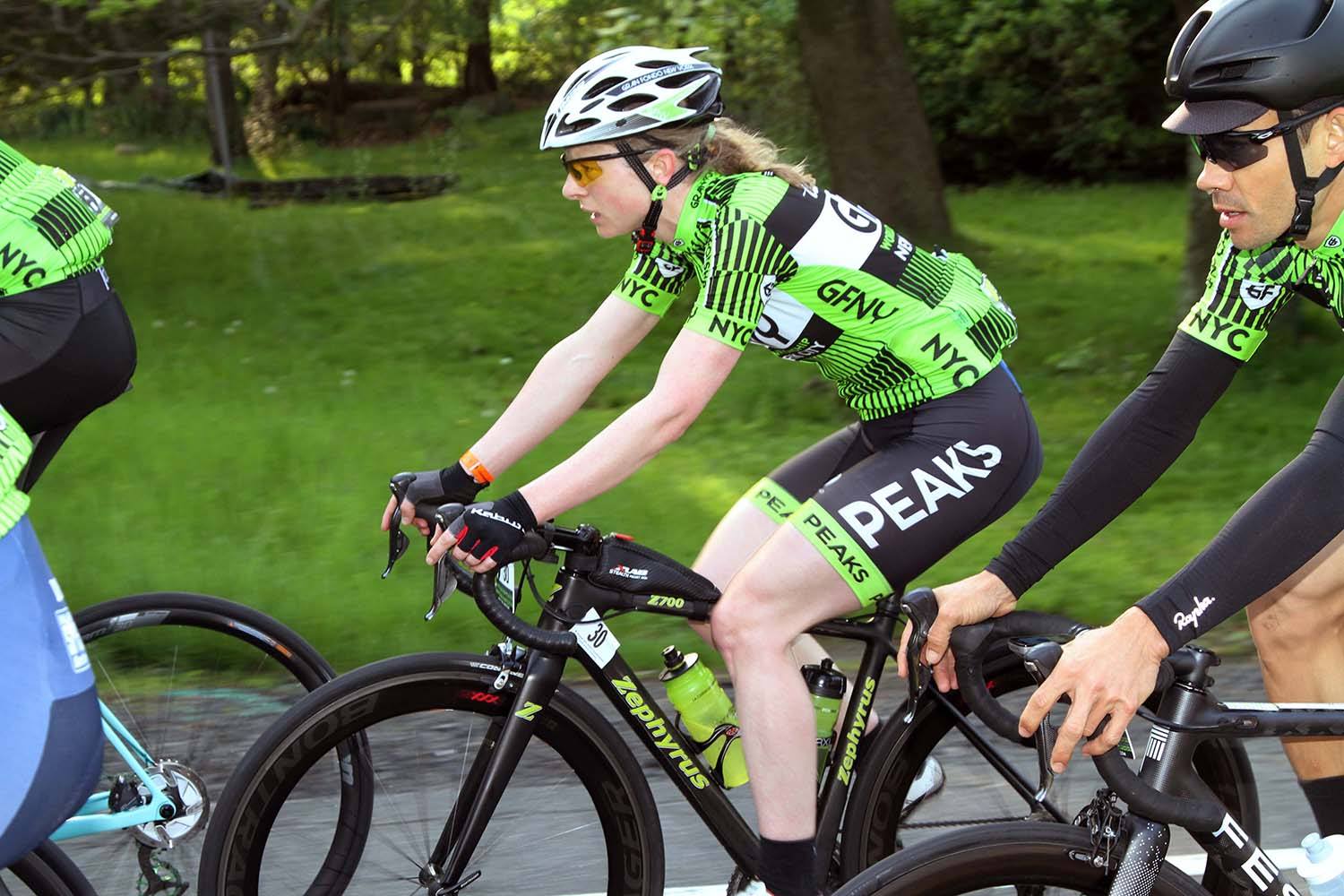 Jill bested 5-time GFNY NYC winner and 12-time GFNY Champion Camila Cortes from Colombia, who was followed by a film crew for their documentary Road To 13.

On Sunday, May 19, a field of 5000 cyclists, comprising of professionals, elites and weekend warriors from 95 countries took part in the ninth annual GFNY World Championship from George Washington Bridge.

Hunter Allen: Were you intimidated by the hype around the previous winner with her film crew?

Jill Patterson: Yes, I was very intimidated when I heard, about a week before the race, that they would be there.  I knew it would give the previous winner even more motivation to win this year, and she would do anything she could to not lose.  The camera crew were next to and filming me for a lot of the race, but that didn’t make me nervous because I was so focused on the riding…I didn’t really notice them.

HA: Would you share your power file with us?

JP: Yes! I shared it – if you have any questions about the data or why it looks like it does, please ask.  You’ll notice there’s a blip of low power right at the start (in the middle of the first power peak) of my last attack – my legs started cramping, and that has NEVER happened to me and it really threw me for a second.  But I changed position and luckily it immediately went away.  Phew! (Read’s Hunter’s Analysis here.)

Bear Mountain is a crucial climb and is where the race first splits, and I knew I had to be prepared to go hard for those 20 mins (5% avg).

HA: Did you have a certain power in mind when climbing?

JP: YES!  Definitely!  Bear Mountain is a crucial climb and is where the race first splits, and I knew I had to be prepared to go hard for those 20 mins (5% avg).  Last year I climbed it at about 250 average, and around January of this year, that was still my “set point”.  Whenever I got on a longer climb (10+ mins), I would naturally settle in to about 250 watts and hold that to the top.  I wasn’t able to push comfortably above that, but I knew I would have to if I wanted to not get dropped on Bear this year.  So, starting around February I made it my goal to climb comfortably at 270 watts.  I wanted my body to naturally choose and settle in to that power when on a climb.  At first I used my power meter and forced myself to ride at 270 whenever I did my hill-repeats (about once a week).  The first few times were quite difficult, but I did it, and after a few weeks it got easier.  I gradually worked up to holding 280 for 20 minutes, and could pedal 280 – 300 when doing shorter efforts (5+ mins) and recover quickly.  Once I got used to riding to power, I then stopped looking at my power numbers when riding hills…and sure enough, my body was settling in to about 270 watts when I climbed.  A month before the race I went to NY to preride the course.  I did the whole thing without looking at my power numbers.  It of course took a lot longer to ride because I was riding with just one other person (about 6 hours), but my normalized power for those 6 hours was 217 and my average power up Bear Mountain was 270.  When I saw those numbers after the ride I knew I was prepared for the race.

HA: How did the finish take place, walk us through the last 5km

JP: One of my goals for the race was to NOT let it come down to a sprint finish because I can’t sprint.  I will never be a sprinter.  But I have super high 1-2 minute power and fairly high 5 and 20 minute power.  There is a 1 mile climb with grades up to 10% about a mile before the finish, and I knew I could use my short-term power as a last-chance effort on that hill.  The way the race unfolded made it come down to that last hill, even though I had been hoping for a breakaway chance before that hill (the lead group split into 2 on Bear Mtn, I was in the second group with two other women, and the course and group I was with didn’t lend itself to breakaways after Bear Mtn).

About 10 miles before that last hill I started planning my “last chance” effort.  Leading up to that hill is a fairly technical, fast, narrow road for 8 miles.  I was in a group of about 20 men and two other women coming up to that road, and I knew that, in order to attack on that last hill, I would need to position myself in the first 5 or so people because I wouldn’t be able to get past 20 people on the narrow road to attack.  And if I was in the first 5 or so people, and the two women were further back, I knew the men might serve as “blocks” when the women tried to cover my attack.  So I made sure to be towards the front of the group when we got on that road, and I maintained that position all 8 miles until the hill.  As soon as the hill started I jumped hard, got a gap, and then continued as hard as I could up to the top of the hill.  Only one guy came with me, and towards the start of the attack he said, “if you get me to the top of the hill I’ll bring you to the end”.

Ok – interesting side story to this.  Rewind.  Last year I placed second.  One reason I placed second is because I was with the third place woman in a group but I attacked on a hill about 30 miles from the end, got a gap, and one guy came with me.  After we descended the hill the guy said, “ok, we can let up and let them rejoin us because why waste our energy”.  I immediately said, “no way!!  I just got away from the third place woman and want to stay away!”  As soon as I said that, he was all about it and said, “ok, let’s go!”  So we did.  We worked together and increased the gap and started picking up stragglers.  Each time we would pass another guy he’d say, “hey, join in!  We have the second place woman with us!  Let’s help her!”.  Thanks to him and our growing group I got to another big group, recovered with them for a bit, then continued on to secure second.  Fast forward to this year…20 miles before the finish I hear, “hi!  Remember me?  James from last year”.  It was the same guy – I said hi and we chatted a minute, then continued on with the race.  When I attacked on the last hill this year, one guy came with me…James!!  As soon as we got a gap, he said, “ok, you ready?!  Let’s go!”  And, yet again, he was my biking guardian angel.  I suffered as much as I could to the top of that 1 mile hill, in immense pain, and as soon as I got to the top he pulled ahead.  He monitored his speed, made sure I got on and stayed on, and then started pulling me harder and harder as I recovered a bit.

I knew there was only a mile of flat left, and we had maybe 15 seconds on the group behind, but it was just two of us and 20 or so of them, and I was haunted by images of so many races where people get caught at the last 50 meters.  So I was kind of freaking out.  I told James, “go faster!  I can hang on!”  But he looked behind him at the group trying to catch us, looked at me, and said, “trust me.  I’ve got this, I’m going to hammer it on the riser”.  So I just let his confidence guide me, and something in me let go and relaxed and I forgot my pain and fear, and just focused on his wheel.  I didn’t even realize we were going harder up that little riser (I saw it later in my power data), and then 5 seconds before I crossed the finish line I realized I was going to win.  I couldn’t believe it!  I had wanted it so badly, but deep down I had doubted it could really happen.

HA: You were runner up last year, what knowledge did you take away from that that helped you this year?

JP: I knew the numbers I would have to be able to hold on Bear Mountain (I also analyzed past races and Camila’s performances via strava, and learned a lot from that).  I knew the first 10 miles are crucial, and that if I didn’t stay with the top 30 or so people during that time I would never be able to catch them…that’s what happened last year…I started at around #500 and spent the first 10 miles trying to pass a bunch of people and catch up to the lead group.  I did, but I was so exhausted by that time that I soon dropped…and never saw them again.  So this year I made sure to confirm with the race director that I could start in the first coral with Camila, and I also made sure to stay with that lead group.

I also used climbing wheels last year, and switched to aero (60mm) wheels this year, which made a huge difference.  The climbs on the course aren’t long or steep enough to warrant climbing wheels – the course is 100 miles, and the benefits of aero wheels really add up over that distance.

And, lastly, I knew that Camila was used to winning by basically staying ahead of the other women for the entire course.  So I knew it might throw her if a woman was with her up all of Bear Mountain, and after.  At one point I pulled ahead of her and stayed ahead until almost the summit of Bear – I think that probably really shook and challenged her because that’s the fastest a woman had ever gone up Bear (confirmed after the fact on strava)…at that moment she knew the challenge was on for the rest of the race, and she wouldn’t be able to just ride away from me like she had every other woman every other year.