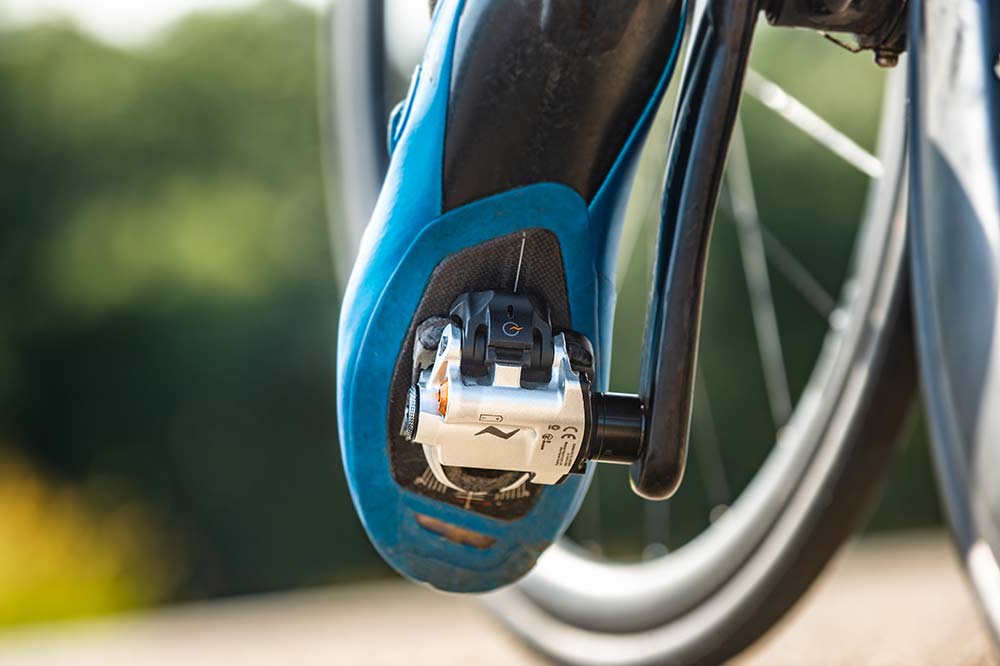 originally published November 2015 and expanded in the 3rd edition of Training and Racing with a Power Meter.

About three years ago we were introduced to power meters that separate left-leg and right-leg power from combined power. Since this ability to capture each leg’s contribution to total power is a relatively new concept in the power world, it has been difficult to really discern whether or not this information is useful or meaningful, mostly because we didn’t have software to analyze the new channels of data. This was not unlike the early 2000s when we first had power data but no real way to analyze or understand it.

Since then we have come to a standstill in our knowledge. I have been studying left/right power data intensely for the past two years. I wanted to discover for myself and my clients (and ultimately all cyclists) what it means and how to create meaningful analysis and coaching advice from it. In these two years, I have worked with the core development team of TrainingPeaks’ WKO4 software (Dr. Andrew Coggan, and Kevin Williams) to create some new analytics from this information, along with unique charts and graphs to more completely understand how each leg contributes to total power. As you can imagine with any new analytic tool, there are many new concepts to learn, and I’m sure you’ll hear a lot from us on this topic to help you decide if a left-right power meter is in your future and how best to use it.

Just like the first steps of power training, we start with some testing. You tested your functional threshold power (FTP) and power profile values when you first bought your power meter (and hopefully are continuing to test regularly), and you’ll need to do a little additional testing with a left-right power meter. The first test to complete will take four consecutive days of testing, so be sure to plan this in advance so it won’t significantly impact your overall training plan. This first test should ideally be conducted on a five-minute hill, but if you don’t have one of those nearby, you can also test on a flat road, preferably into a head wind to give you a little more resistance to push against. For the hill test you’ll be alternating between standing and sitting while climbing. For the flat test you’ll be alternating your focus (intention) on your left and right legs. I’m going to describe the hill-climbing test here, and as we go I’ll provide alternates if you’re using the flat test. The goal is the same for both tests: to learn how you create power from each leg and how that contributes to the total power output. Before you can embark on your new journey, however, you’ll need to understand some of the new analytics in TrainingPeaks’ WKO4 software, so that you can interpret the data you generate.

The first concept to understand and review is gross power released and absorbed. During pedaling, each leg releases power and absorbs power throughout each pedal revolution. On the down stroke, the left leg releases power while the right leg absorbs some of the power released by the left. It’s highly possible that the opposing leg can significantly absorb more power than you might expect and negatively impact your total power. The opposing leg’s job is really to get out of the way on the up stroke while preparing for its own down stroke. This allows you to produce more releasing power, which is what ultimately moves the bike forward faster. When the left leg is on the down stroke and the right leg is opposing it on the up stroke, we call this the left power phase. When the opposite is occurring with the right leg on the down stroke and the left leg on the up stroke, we call it the right power phase.

Every rider has a unique pedal stroke. Some of us release more power through the left leg than the right. Some of us punch at the pedal stroke with one leg while the other leg smooths the power over the circle. Still others absorb more power on one leg than the other leg. There are other things happening during the pedal stroke too, and we’ll discuss those in later articles. For now let’s stick with gross power released (GPR) and gross power absorbed (GPA); they are the more important concepts to understand in the first tests. 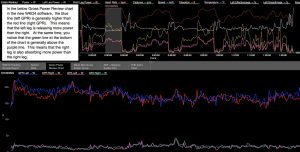 Take a look at the gross power review chart above (the lower part of the screenshot with the red, blue, green, and purple lines). This is the first chart to look at in the pedaling metrics pack bundled in the WKO4 software. The red line is right-leg GPR during whatever time period you’re reviewing, and the blue line is left-leg GPR. (Remember, GPR is the power you release on each pedal stroke to propel the bicycle forward.) The green line represents right-leg GPA, and the purple line is left-leg GPA. (Remember, GPA is the power that is being produced that does not move the bicycle forward; it is generally resistance, or negative power.) Minimizing GPA produces more overall power. 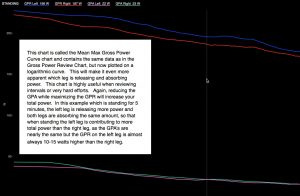 The chart above shows a five-minute standing interval test (five minutes at VO2Max, standing the entire time) to demonstrate the relationship between left/right and standing/seated power outputs. This chart is the mean max gross power curve. It contains the same data as the gross power review chart, only plotted on a logarithmic curve to more clearly reveal which leg is releasing and absorbing power. This chart is highly useful when reviewing intervals or very hard efforts. Again, reducing the GPA while maximizing the GPR will increase your total power.

In the chart above, the left leg is releasing more power and both legs are absorbing the same amount of power. When standing, the left leg contributes to more total power than the right leg, as the GPAs are nearly the same, but the GPR on the left leg is almost always 10-15 watts higher than the GPR on the right leg. These two charts (gross power review and mean max gross power curve) are going to be the main charts to study, along with the pedaling reports, in order to understand your left/right power.

Now that we know the concepts and charts, let’s dig into the pedaling tests! Each day will have the same essential test, but each day will have a different goal and pedaling emphasis. Each day you will complete three five-minute intervals at your VO2Max power (roughly 113-115% of your FTP). The first interval will be standing the entire time, the second will be seated the entire time, and the third interval will be alternating standing and seated: stand when you want to and sit when you want to.

Since you aren’t standing here, do the first interval with your hands on the hoods, the second with your hands in the drops, and the third with your hands wherever you’d like them to be. Complete the four days of testing exactly as in the hill-climbing test except stay seated the entire time and modify the hand positions as described. If you have aero bars, you could do the tests in and out of the aero bars to see if this might have an effect on your pedaling asymmetry as well.

Pick a route you can repeat each day. It must be the same route, and all efforts must start at the same location. Try to make each of the four testing days as identical as possible. Warm-up: Ride for 20 minutes toward the testing area. If you have to ride a little longer, that’s fine, but maintain a nice endurance pace (56-75% of FTP). Main set: After warm-up, do 5 x 1-minute fast pedals to get your cadence to 110-120 rpm. Hold it there for one minute, then recover for one minute at 80 rpm. The goals here are to ensure you’re properly warmed up and to preserve muscle glycogen for your intervals. Once at the testing area, get psyched and do 3 x 5-minute VO2Max efforts. Remember, the first interval is standing for the entire five minutes, the second is seated, and the third is standing when you want to and sitting when you want to.

If you’re doing the flat test, the first interval is on the hoods, the second is in the drops, and the third is wherever you prefer throughout the interval. Rest for 5-8 minutes between each interval. After completing the third interval, ride home at tempo pace (76-90% of FTP). Once home, connect your power meter head unit to your WKO4 software to look for key data and to make notes in your post-ride descriptions. This is important so you can compare notes from each day of testing. First, determine if one leg releases more power than the other when standing and sitting. If there’s a difference in the GPR between the left and right legs, then check for a difference between GPA when seated and standing. For example, we see in the chart below that this rider releases 10 watts more power with the right leg than the left while seated. This is a significant difference. At the same time, the GPA of the left leg is also higher by 5 watts. 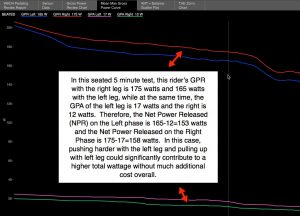 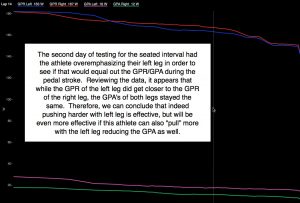 In the chart above we see the results from the second day of testing for the seated 5-minute effort. Here the rider’s right leg GPR is much higher than the left for natural pedaling, so he emphasized a higher force with his left leg to release more power on that side. The left leg indeed got much closer to balancing the left/right GPR, but the left-leg GPA stayed the same, effectively reducing the NPR on the right side. This second test indicates that better symmetry on both the right and left legs while seated requires the left leg to both push and pull to even out the power production.

As we will see, the following two days of testing prove this theory correct. The third day of testing emphasizes the left leg for all efforts to possibly prove some of the observations from day two and to demonstrate the impact on the GPR/GPA of the left leg while both standing and seated. With this athlete, the left leg becomes more balanced in GPR, but the GPA of the left leg remains around 4 watts higher than the right, which is very close. In the chart below, notice how much closer the GPAs are for the entire five-minute interval. This is most likely an indicator of more pulling up on the left leg. 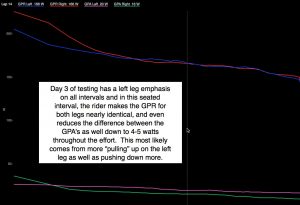 The fourth day of testing emphasizes the right leg and shows a very high right leg GPR when seated, thus giving the rider no real actionable intelligence. However, day four was highly revealing regarding the standing interval; I’ll have to save that for another article! While it might take some time to understand all the theory behind left/right power analysis, the four-day testing protocol will help you appreciate the wealth of new data. The built-in pedaling chart pack in the WKO4 software makes it really easy to understand the charts, so you can save the hard work for the intervals. The goal of all this testing is to find out if you have a leg strength imbalance that might be effecting your power output. It can also identify a problem with the way you ride your bike (your actual position and form). These issues can be tough to find without digging deep into the analytics and throwing in some testing for good measure.

Remember, testing is training, and training is testing.

If you’d like expert help with analyzing and using your left/right power data, contact us today! We can help.