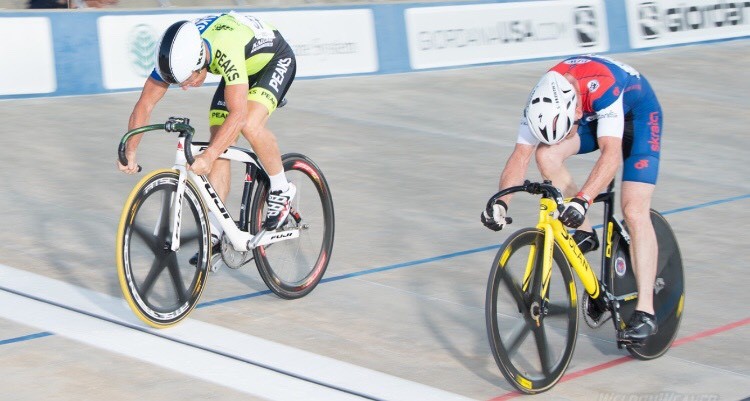 Old school thinking: Either you have it or you do not, either you are a sprinter or you are not.  Sprinters are born. Pure sprinters are endowed with fast twitch fibers. And if you do not, and you are not, you might as well forget it—and you’ll never win a sprint. I was told that and I believed it for the longest time.

When I was in my 20s I was racing the US Olympic development race series on the East Coast against the top amateur racers in the US. I qualified for the US Olympic trials along with 44 other qualifiers in the three regions of the US.

I was good enough to get in a lot of breakaways but since I knew I wasn’t a sprinter (I had been told) and knew I couldn’t sprint, guess what happened? I never won a race in a sprint even in a small breakaway in spite of having some great finishes.

When it came down to the sprint I knew I was going to lose, so of course I did.

Does that story sound familiar?

A serious injury (a 20 foot fall off a ladder) in my 20s curtailed my competitive biking career; it was over, at least in the way that I knew it, long 50-60  mile Criteriums and 100+ mile road races.  After marriage, starting a family and career, when I hit age 35 I decided to try Masters racing. My back had improved and I was able to handle the shorter distances in training and racing. I read and reread Greg Lemond’s “Complete Book of Cycling”. Among other things, he promoted  a somewhat unique protocol for training (for the time) utilizing a lot of high intensity workouts included sprint training every week–in fact–twice a week. He said, your sprint can be improved with sprint training. I started to train my sprint and I started to believe, Thus, I began my metamorphosis to remake myself as a road sprinter.

It’s not always the best sprinter, or even a sprinter that makes it to the end of the race. In fact many times the successful breakaway group, or the remaining group in the pack–who survived by attrition–is filled with riders who also believe they can’t sprint. Therefore in many cases it becomes out-sprinting a group of riders who believe (like I used to) that they are, in fact, going to lose the sprint.

The first key to improving your sprint is belief, believing that you can:
I can win the sprint.

Ultimately, over time, that belief needs to evolve into a belief that you will:
I will win the sprint.

When I first tried to believe I could sprint, it was a major struggle; my mind, literally, wouldn’t let me do it. When I try to imagine crossing the finish line 1st, glancing side-to-side, not seeing any riders’ wheel in front of me, I couldn’t do it. My mind just wouldn’t go there.

Whenever I tried in a quiet moment to visualize winning a race, in a sprint, I’d get into a fight with my subconscious mind. You can’t do that. That’s not going to happen, it would say to me. My mental rehearsals were backfiring. As I would picture the final kilometer–instead of pulling away at 200 meters, gutting it out for the last 100m, then finishing with a flurry of unmatched speed in the final 100, then 10 meters–I was swarmed by the bunch. Drained. Humiliated. Beaten to the line. Oh the cruelty!

At the time I was working a 50 hour a week job in the Boston suburbs, supporting a young, growing family. So I started. Every weekday, I would drive the beltway in stop-and-go, bumper-to-bumper traffic to and from my office. I had a sunroof I rolled open determined not to give up. To better imagine that I was a sprint winner, I’d raise both arms in a victory salute, out the sunroof (of course at the stop parts of the stop-and-go). Surely my rush-hour co-patriots must have thought I was crazy, but I didn’t care. It was Matter over Mind.

Then to further overcome, and to make it even more impressionable on my subconscious mind, I utilized a full dress rehearsal approach when I practiced—at least—once a week. At the end of each sprint, at the final imaginary finish line, (which I would often note precisely in advance by finding a good finishing point, then “rolling back” in my predetermined sprint gear and pedal strokes, to where I needed to start), I’d raise my arms in a 2 handed victory salute, visualizing the win, crossing the line alone, hearing the crowd acknowledgement and feeling the excitement and joy of the win.

Let’s just say: It worked. I started to win. But I still had to pinch myself and fight with my subconscious. The difference: Now I had real memories to draw from. And my experience and confidence would grew with every sprint success.

Mostly the work to be done is very specific on-the-bike training, with good form. Repetition. Every week. With perfect form. It’s perfect practice that builds your mind and your body to get the job done, at the exact moment it’s needed, to win the sprint. One of the key principles of sports training, is Specificity–to be effective, training should be highly specific to the demands of the event. To become a better sprinter you must practice sprinting.

It is helpful to know that there is an entire, unique energy system that comes into play only for the short 12 to 15 second burst of speed. It’s the ATP-PC system. It’s a subtle system that needs practice to efficiently draw from it.

Over the years I spent a lot of time trainer watching CDs, DVDs and videos of professional sprinters sprinting at the end of the race. If you want to see good road sprint form, watch the best professional road sprinters of our time. Check out the flattish, sprinter Tour de France races in the final 3 to 5 km as to how the sprint sets up.

Once the full out final sprint begins (usually the final 200 meters), notice the top sprinters’ form: 1) the overall position on the bike 2) hands in the drops (not the hoods), 3) a “whipping” of the bike from side to side. 4) the length (time in seconds) of the final effort of the winning sprinter–interestingly it’s rarely more than 12-15 seconds–after pulling out into the wind from the draft of the lead-out rider, 5) then there is the number of pedal strokes. Count them. Amazingly, it’s almost always 20 pedal strokes plus or minus a few, in the final burst to the line. And that’s what you want to practice!

Because this is all fueled by the ATP–PC energy system, when practicing you must allow for the system to replenish before repeating. Therefore take at least three to 5 minutes (even as much as 10 minutes) rest between all-out sprint efforts.

My first cycling coach was a young ex-pro. His training program had me in the gym one day a week. I wondered why, and frankly I resisted. How could lifting weights help me riding a bike? It didn’t seem specific enough. Later I discovered the importance of resistance training for maintaining muscle mass especially as the athlete ages to offset the Also to strengthen the core, back and upper body to better support the cyclist on the bike. Once again however, the more specific to the movement of cycling the better.

When I became a personal trainer a few years ago I discovered resistance training with kettlebells. In 2015 I became an RKC™, certified in Hardstyle Russian Kettelbells training. Soon after I invented KettleBell Max™ Dynamic Resistance Training System, specifically for cycling. Everything that can be done with free weights, can be done with kettlebells, but better: more stabilization muscles are required with every move; resistance training that can be done unilaterally, dynamically and explosively.

Resistance training has many benefits in addition to maintaining muscle mass: If done explosively as a power movement, it recruits fast twitch muscle fibers which helps in bike accelerations and sprinting. Also resistance training positively stimulates and recruits favorable hormones such as Testosterone and Human Growth Hormone. It can help maintain favorable body composition especially in the off season. A study done by ACE showed snatching Kettlebells burns calories at a rate of 20 calories a minute. Back-to-back high intensity KB efforts, as found in my KettleBell Max™ Training System, also doubles as a high intensity interval session with a cardio component.

Proper diet and Nutrition is a key support system as well. Most important is a post recovery shake or drink taken within an hour after a hard workout. Athletes should target protein grams per day from 85%-100% of body weight in gram. Protein pacing studies show significant improvements by spreading protein intake evenly in 5-6 doses per day. Whey protein, from grass-fed cows, is particularly important for the post recovery shake and overall to build lean muscle tissue. Almost 50% of my protein intake target is whey protein (in the form of shakes and bars) from grass-fed cows, and the balance from organic sourced meats, eggs fish etc.

Then there’s proper rest, massage and a properly designed training program utilizing progressive overload and periodization over one or more racing seasons. (More on all these topics in later columns).

In May 2016 eight months after a challenging from a severely broken leg. I found myself in the USAC Cycling Masters 60 mile Road race with 200 m to go. I was second man on the wheel of the reigning world champion pursuit champion (with 2 down the road). When I hit that 200 m mark I was ready: I was in my sprint gear and my sprint point had been rolled out; I had rehearsed this moment thousands of time in my head. I believed I could win and I did.

In 2017 I began to focus on track racing. In July 2017 I found myself on the warm-up circle at the USA Masters Nationals in the finals for the Match Sprint competition. I didn’t win but did get the Silver and had the 2nd fastest flying 200 time. In the UCI Worlds Masters track in October I managed to make it to the top ten of the fastest sprinters in the world. Not bad for a guy they said couldn’t sprint. More work yet to do–but look out next year!

These three keys have worked for me. And over the last 10 years as a USAC cycling coach I’ve helped many athletes utilizing these same principles to win: scores of sprints, races, regional and state titles and 10 national championships.

LeMond was right: if you practice sprinting–with the correct form and frequency–you will get better!

Charles Gary Hoffman is a Peaks Coaching Group Elite Coach. He is a USAC Level 2 Coach and NASM-Certified Personal Trainer.