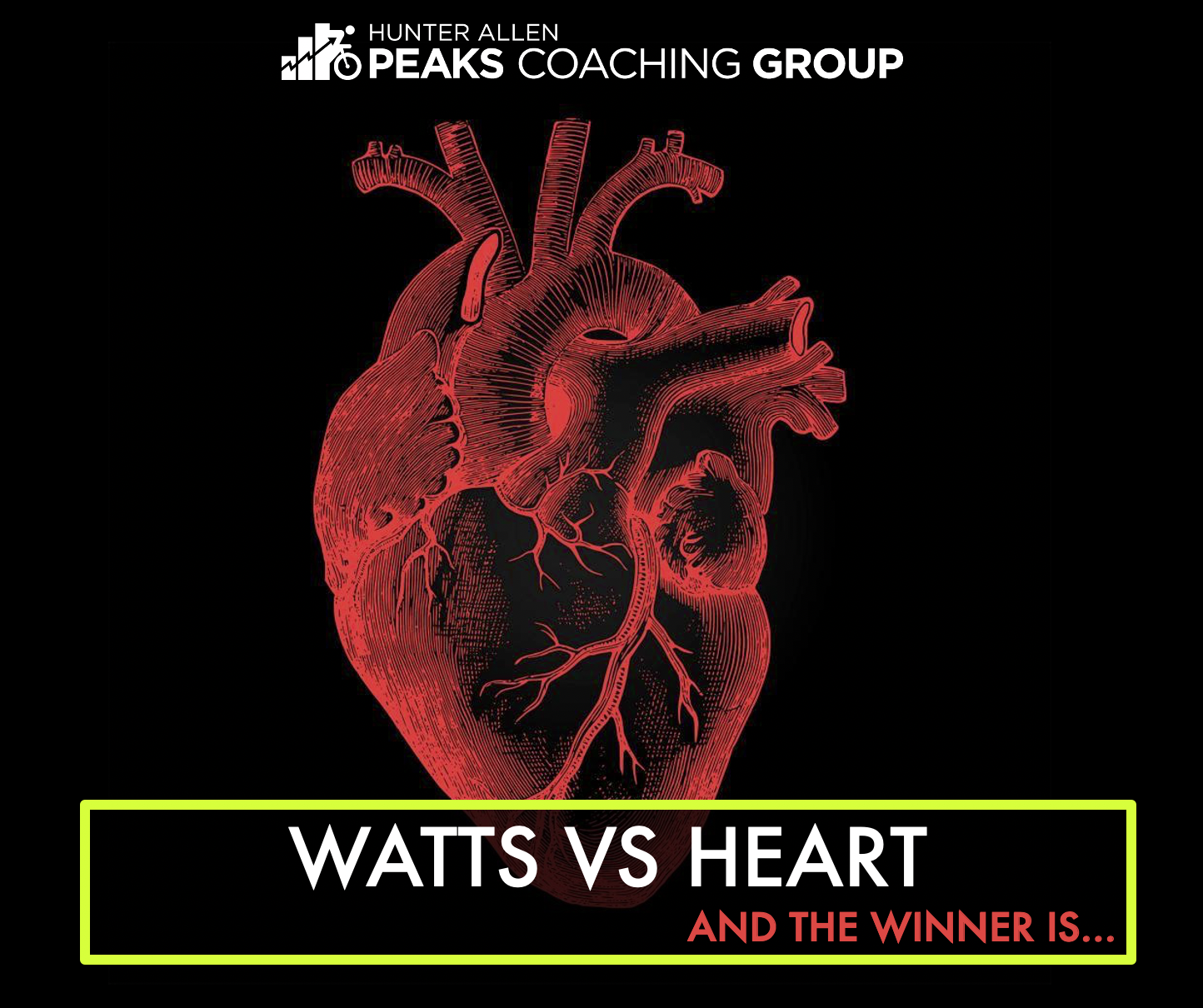 Peaks Coaching Group has led the power revolution for almost 20 years. But does that mean that we ignore heart rate? Which data set is more important to training, if either? Read on!

Heart rate monitors first came on the cycling scene in the 1980s, allowing us for the first time to train scientifically. Prior to that, we had to train solely by perceived exertion. Heart rate allows us to train at more specific levels of work produced, depending on the physiological system (aerobic, threshold, anaerobic) we wanted to emphasize. Pretty soon everyone serious about training and improving was riding the wave and using a heart rate monitor.

Then about 15 years ago, power meters became widely available and began to supplement or even replace the use of heart rate monitors. Power meters offer a number of advantages over heart rate monitors, such as being able to monitor actual exertion directly, rather than indirectly as heart rate does. Power data also provides extensive analytics after your training rides and seasonal fitness to help you assess and monitor your progress.

I strongly recommend the book Training and Racing with a Power Meter (3rd Edition) by Hunter Allen and Dr. Andrew Coggan to learn about all the metrics that can be used with power data, but in this article I’ll give an example of how training with a power meter is much superior to training with a heart rate monitor.

Before I get into that, though, I want to emphasize that power meters do not completely replace the need for a heart rate monitor. It is still useful to measure your body’s response to training and to compare heart rate with power data.

One of the greatest advantages of training with a power meter is, in my opinion, that a power meter gives you the ability to dial in your desired level of exertion immediately. This is especially true for shorter intervals. The reason is the key difference between power and heart rate: power meters measure the power your body produces, and it can be measured directly and instantaneously, whereas heart rate is an indirect measure and responds to the body’s effort and is thus a delayed measure of exertion. In addition, heart rate can be affected by a number of other factors such as fatigue, dehydration, and temperature. I find that it takes one to two minutes for heart rate to catch up to a steady state power output

Here’s an illustration of the way heart rate lags behind exertion. The chart below is a cyclist’s five-minute interval. While the power (yellow line) is fairly steady, note how the heart rate (red line) increases and doesn’t reach a steady state until two minutes after the start of the interval, and then continues to creep up.

This lag makes it impossible to use heart rate for intervals shorter than two minutes. As you can see, however, the power measurement is up to the targeted level within seconds of the start of the interval.

If you want to do short intervals and use only a heart rate monitor, you’ll have to tackle them by feel, because the interval will be over before your heart rate catches up.

Here’s a great illustration of this phenomenon. The chart below is a workout of 30-second anaerobic capacity intervals. This cyclist used both a power meter and a heart rate monitor.

Note how the heart rate peaks several seconds after the end of the interval. If you tried to do these with a heart rate monitor only, the heart rate wouldn’t be at all useful in guiding your effort. Having power data allows us to target our desired exertion level immediately.

Take a look at the graph of heart rate below. What type of workout do you think this is? Perhaps a time trial with some undulating hills?

Now look at the same workout with power data included.

The workout is actually a series of very hard, short intervals separated by very easy recovery intervals. When doing a series of short intervals of 30 seconds or less, heart rate tends to be fairly constant because of the inherent lag. Just as your heart rate begins to climb, the effort ends and heart rate starts heading back down, just as the next interval starts. The longer these go on, the more the heart rate mimics a steady-state effort despite the alternating very high and low exertion levels of the workout. Not only is heart rate not effective in determining exertion level during these intervals, it also isn’t useful in evaluating the intensity of the workout; as you can see, this was a much more demanding workout than heart rate alone would suggest.

Heart rate tracking is great for starters. When you’re ready for the next level, try a power meter!

DISCUSS TRAINING WITH A COACH!

David Ertl is a USAC Level 1 coach, the author of four cycling training books, a father of twin sons, and a Peaks Coaching Group associate coach. He and his fellow PCG coaches create custom training plans for endurance athletes of all levels of experience. David can be contacted through peakscoachinggroup.com or through info@peakscoachinggroup.com.