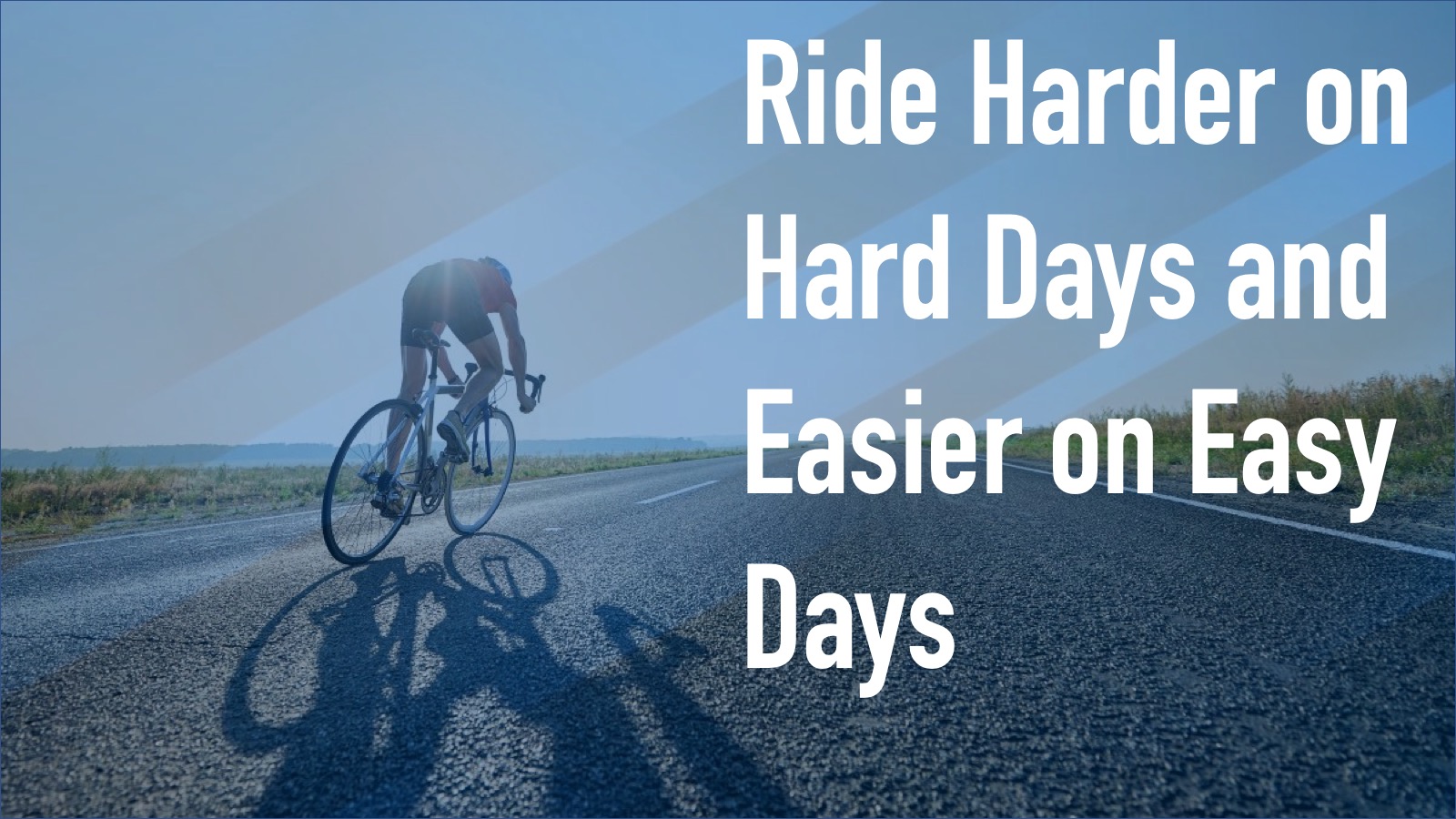 One of the main things that differentiate recreational cyclists from competitive cyclists is the intensity with which they train.

When recreational cyclists come to me and want to get faster, they almost invariably say that they feel they are pretty strong, they ride a lot of miles usually, and they can keep up with faster riders.  However, when the pace kicks up or they hit a hill, they get dropped like a stone.  This is very indicative of riders who do a lot of endurance and tempo paced training.  What they are lacking is the top end speed work.

Competitive cyclists do various types of interval and power workouts.  These are very hard workouts and not a lot of fun, which is why many cyclists don’t do them unless they are training for a competitive event.  But while recreational cyclists may not ride hard enough to improve past a certain point, competitive cyclists often don’t ride easy enough on their recovery days to fully recover.

Let’s look at the difference between riding easy and training hard, and what you might want to consider doing.

Coaches talk about training intensity using various training zones.  I use zones similar to those used by Joe Friel, Hunter Allen and Andrew Coggan.  You can read more about my training zones on my website.  Basically there are six training zones: Recovery, Endurance, Tempo, Threshold, Anaerobic and Maximum Effort.

Recreational cyclists do a lot of riding in the Endurance and Tempo ranges.  These are fairly easy to moderately hard rides.  You do not get out of breath during these types of efforts.

Competitive cyclists train in these zones as well but also in the Threshold and higher zones.  Threshold is the pace at which you can just barely maintain without going anaerobic, in other words, where you become out of breath and your muscles burn, such as when time trialing.  Anaerobic is where you are breathing heavily, your muscles burn and you can’t maintain the pace for more than 5 minutes.   And Maximum Effort is just that – going as hard as you can for 30-60 seconds max.

Recreational cyclists who want to get faster should start doing some Threshold level rides to increase their aerobic capacity, in other words, making a larger engine which is able to suck in more air and generate more energy before going anaerobic.  In even simpler words, they need to work harder than they normally work.

Most recreational cyclists do not need to train in the anaerobic range.  These would be your typical intervals, such as riding as hard as possible for one minute, then taking a two minute recovery spin, or doing uphill intervals.  As mentioned above, this is very hard work and not a lot of fun.  However, there is no reason recreational riders can’t do this type of workout if they are healthy (check with your doc first!) and want to do it.  Adding speed work to your normal endurance and tempo paced rides will result in noticeable improvement in speed and strength.  The day after doing one of these harder rides, however, there should be a rest day of no riding or easy, recovery paced spinning.

Competitive cyclists do a lot of endurance and tempo riding as well, but on top of that they do threshold, anaerobic and max effort workouts.  This is what makes them strong and fast and allows them to compete.   But, I’ve noticed that many competitive cyclists don’t take the time nor make the effort for proper recovery, either because they are so driven to train hard, or because they simply don’t know the value and the methods of recovering.  Very young, fit cyclists can manage 4-5 hard training rides per week.  But even the fittest riders should spend 2 or 3 days per week recovering.

Recovery can either be accomplished by not riding at all or by spinning very easily as active recovery to help speed up the rate at which the muscles and loosen up and regenerate for the next hard workout.

It’s common to find competitive cyclists who train hard 4-5 days a week, and then on their easier days, they still ride fairly hard, such as in the endurance through threshold ranges.  By resting and recovering, they can train harder on the hard days, but only if they take it easy enough on the recovery days to fully recover.

So cyclists who wish to improve need to ride harder on their hard days but make sure they ride easy enough on their easy days.

Recovery is also an issue for recreational cyclists if they are riding a lot of long moderate paced miles.   Long rides still take a toll on the body and require recovery.  So even if your ride isn’t fast but is long (>2 hours), treat it as if it were a hard ride.

Failure to adequately recover will slowly grind you down to the point where your performance plateaus, or worse, declines, because you’ve built up chronic fatigue.

Rest adequately during the week and then take it easy every few weeks to allow your body to regenerate and refresh.

David Ertl is a Peaks Coaching Group Elite Coach. He is a USAC Level 1 Coach and is a LEOMO Motion Analysis Certified Coach.